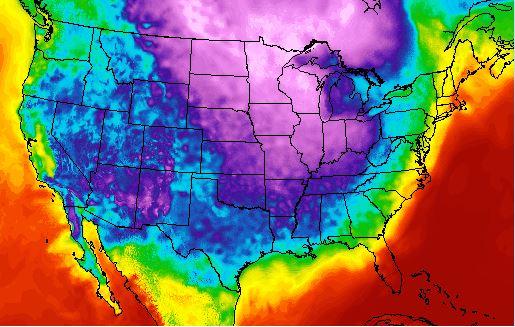 Three short, amusing videos to watch while keeping warm as the snow falls in Las Vegas and most other places are plunged into subzero weather.

The Polar Vortex Explained in 2 Minutes from the White House.

This video clip, originally distributed through the Office of Science and Technology Policy, kicked off the controversy.

Limbaugh is Full of Hot Air

Weatherman Al Roker fired back at Limbaugh’s ‘Polar Vortex’ Conspiracy, showing a page from his meteorology textbook from way back when, defining the term,”polar vortex.”

But can the Polar Vortex – recognized as a real weather phenomenon for decades – be forecast and is it related to climate change?

Well, this year there was an interesting split between weather forecasting services. As an article reacting to the October 16 release of the NWS Long Range Forecast notes .. the commercial forecasters are telling us to brace for the return of the Arctic air in the U.S. while the federal forecasters have countered by saying another wavy vortex dipping far south is “unlikely.”

Well, the National Weather Service and its Canadian counterpart missed the big cold snap in November and the current incursion of artic air to lower lattitudes, due to shifting of the polar vortex.

Accuweather and the Weather Channel, on the other hand, scored big on their forecasts.

At the same time, Internet studies do not show that Accuweather has any leg up in long range forecasting –  snow in New York, for example – beyond a few days from the release of the forecast.

Also, the scientific basis for linking climate change and these polar vortex events is tenuous, or at least multi-factor.

Through a combination of observation-based data analysis and climate model experiments, we provide corroborative evidence for the notion that Arctic sea-ice loss over the B–K seas plays an important role in weakening the stratospheric polar vortex. Regional sea-ice reductions over the B–K seas cause not only in situ surface warming but also significant upper-level responses that exhibit positive geopotential height anomalies over Eastern Europe and negative anomalies from East Asia to the Eastern Pacific along the wave-guide of the tropospheric westerly jet. This anomaly pattern projects heavily into the climatological wave, intensifying the vertical propagation of planetary-scale wave into the stratosphere and, in turn, weakening the stratospheric polar vortex. Therefore, planetary-scale wave generation by sea-ice losses and its upward propagation during early winter months underline the link between surface climate variability and polar stratospheric variability.

The weakened stratospheric polar vortex is often followed by a negative phase of the AO at the surface, favoring cold surface temperatures across Northern Hemisphere continents during the late winter months (Supplementary Fig. 1). Several physical mechanisms for this downward coupling have been proposed. They include the balanced response of the troposphere to stratospheric potential vorticity anomalies and wave-driven changes in the meridional circulation. It is also suggested that the tropospheric response involves changes in the synoptic eddies. However, it has been difficult to isolate the key process, and the detailed nonlinear processes involved are still under investigation21

As a final remark, we note that Arctic sea-ice loss represents only one of the possible factors that can affect the stratospheric polar vortex. Other factors reported in previous works include Eurasian snow cover, the Quasi Biannual Oscillation, the El-Nino and Southern Oscillation and solar activity.

I think it’s probably possible to show – through psychological and historical studies – that human decision-making over risky alternatives is most likely to fail with respect to (a) collective choices over (b) complex outcomes where target events have relatively low probability, although possibly huge costs. This makes the climate change issue and responding appropriately to it hugely difficult.