There seems to be a meme evolving around the idea that – while the official business outlook for 2014 is positive – problems with Chinese debt, or more generally, emerging markets could be the spoiler.

The encouraging forecasts posted by bank and financial economists (see Hatzius, for example) present 2014 as a balance of forces, with things tipping in the direction of faster growth in the US and Europe. Austerity constraints, sequestration in the US and draconian EU policies, will loosen, allowing the natural robustness of the underlying economy to assert itself – after years of sub-par performance. In the meanwhile, growth in the emerging economies is admittedly slowing, but is still is expected at much higher rates than in heartland areas of the industrial West or Japan.

So, fingers crossed, the World Bank and other official economic forecasting agencies show an uptick in economic growth in the US and, even, Europe for 2014.

But then we have articles that highlight emerging market risks:

China’s debtfuelled boom is in danger of turning to bust This Financial Times article develops the idea that only five developing countries have had a credit boom nearly as big as China’s, in each case leading to a credit crisis and slowdown. So currently Chinese “total debt” – a concept not well-defined in this short piece – is currently running about 230 per cent of gross domestic product. The article offers comparison with “33 previous credit binges” and to smaller economies, such as Taiwan, Thailand, Zimbabwe, and so forth. Strident, but not compelling.

With China Awash in Money, Leaders Start to Weigh Raising the Floodgates  From the New York Times, a more solid discussion – The amount of money sloshing around China’s economy, according to a broad measure that is closely watched here, has now tripled since the end of 2006. China’s tidal wave of money has powered the economy to new heights, but it has also helped drive asset prices through the roof. Housing prices have soared, feeding fears of a bubble while leaving many ordinary Chinese feeling poor and left out.

The People’s Bank of China has been creating money to a considerable extent by issuing more renminbi to bankroll its purchase of hundreds of billions of dollars a year in currency markets to minimize the appreciation of the renminbi against the dollar and keep Chinese exports inexpensive in foreign markets; the central bank disclosed on Wednesday that the country’s foreign reserves, mostly dollars, soared $508.4 billion last year, a record increase. 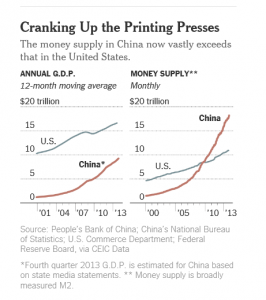 Moreover, the rapidly expanding money supply reflects a flood of loans from the banking system and the so-called shadow banking system that have kept afloat many inefficient state-owned enterprises and bankrolled the construction of huge overcapacity in the manufacturing sector.

There also are two at least two recent, relevant posts by Yves Smith – who is always on the watch for sources of instability in the banking system

In addition to concerns about China, of course, there are major currency problems developing for Russia, India, Chile, Brazil, Turkey, South Africa, and Argentina. 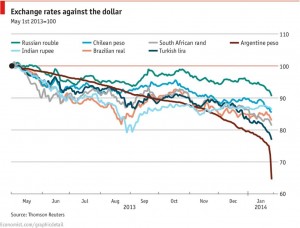 From the Economist The plunging currency club

So there are causes for concern, especially with the US Fed, under Janet Yellen, planning on winding down QE or quantitative easing.

When Easy Money Ends is a good read in this regard, highlighting the current scale of QE (quantitative easing) programs globally, and savings from lower interest rates – coupled with impacts of higher interest rates.

Since the start of the financial crisis, the Fed, the European Central Bank, the Bank of England, and the Bank of Japan have used QE to inject more than $4 trillion of additional liquidity into their economies…If interest rates were to return to 2007 levels, interest payments on government debt could rise by 20%, other things being equal…US and European nonfinancial corporations saved $710 billion from lower debt-service payments, with ultralow interest rates thus boosting profits by about 5% in the US and the UK, and by 3% in the euro-zone. This source of profit growth will disappear as interest rates rise, and some firms will need to reconsider business models – for example, private equity – that rely on cheap capital…We could also witness the return of asset-price bubbles in some sectors, especially real estate, if QE continues. The International Monetary Fund noted in 2013 that there were already “signs of overheating in real-estate markets” in Europe, Canada, and some emerging-market economies.