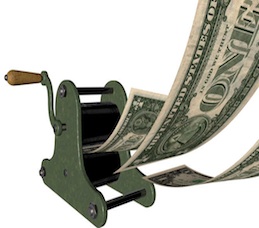 Federal Reserve officials, including a strong supporter of their easy money policies, have so far brushed off the weak employment report as a blip in an otherwise strengthening economic recovery. This suggests they are likely to stick to their plan to gradually wind down their bond-buying program this year as the recovery picks up momentum…

“True, the December jobs report was disappointing,” said Chicago Fed President Charles Evans, who has been a champion of aggressive central bank efforts to spur stronger economic growth. But, he added, “the recent data on economic activity generally have been encouraging” and “importantly, the labor market has improved.”

He said the tentative plan to reduce the monthly bond buys in $10 billion increments “seems quite reasonable” and “it makes sense to continue that in January.

Atlanta Fed President Dennis Lockhart, a centrist on Fed policies, said Monday the December employment report hadn’t shaken his expectation that the central bank would stick to the taper plan.

Meanwhile two opponents of the bond-buying program, Dallas Fed President Richard Fisher and Philadelphia Fed President Charles Plosser indicated in separate speeches Tuesday they were all for winding it down.

Given that chorus, it appears probable Fed officials will trim their monthly bond purchases to $65 billion from $75 billion at their next policy meeting January 28-29 meeting. Now that tapering is under way, the bar for stopping the process seems quite high.

As tablet and smartphone usage becomes more widespread, shopping online has become quicker and easier and the speed of delivery has become critical in the online fulfilment race.

The group of researchers, which includes Arne Strauss, Assistant Professor of Operational Research at Warwick Business School, propose an analytic approach that will predict when people want their shopping delivered depending on what delivery prices (or incentives such as discounts or loyalty points) are being quoted for different delivery time slots.

It takes into account accepted orders to date as well as orders that are still expected to come in….

The new approach was tested using real shopping data from a major e-grocer in the UK over a period of six months and generated a four per cent increase in profits on average in a simulation study, outperforming traditional delivery pricing policies.

If you like this, there are many more infographics focusing on social media at https://www.pinterest.com/JuanCMejiaLlano/social-media-ingles/ – some in Spanish. Also check out Top 10 Infographics of 2013 [Daily Infographic].

Economics: Science, Craft, or Snake Oil? – nice, but sort of equivocating essay by Dani Rodrik from his new offices at the Princeton Institute for Advanced Studies. Answer – all of the above.

Origin and Importance of the Salesman in US – A piece of US business history and culture. I like this.