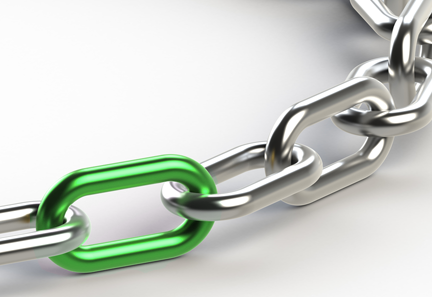 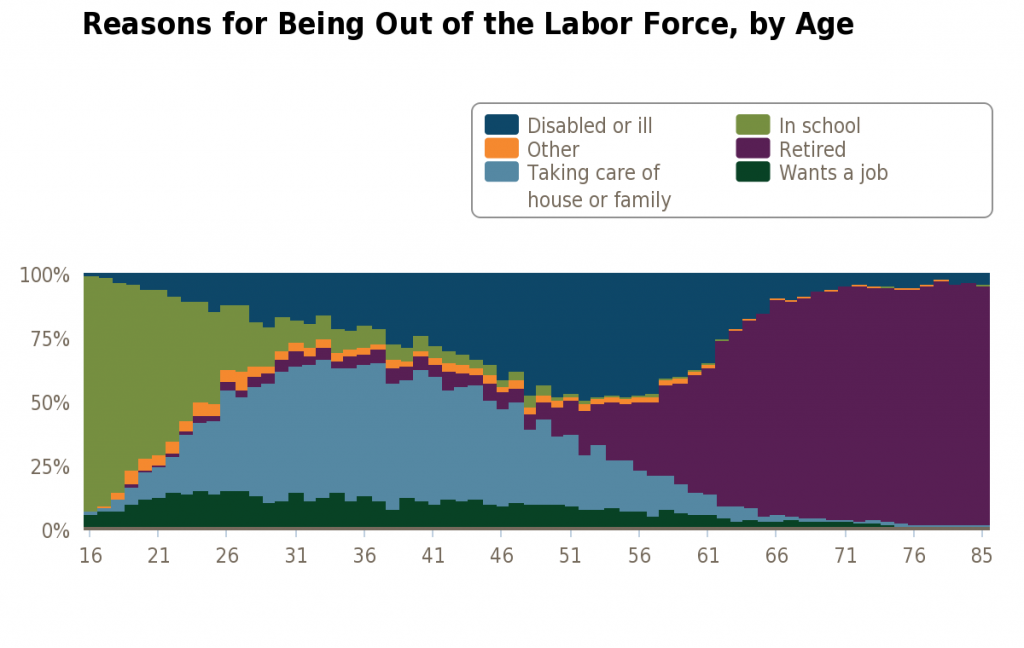 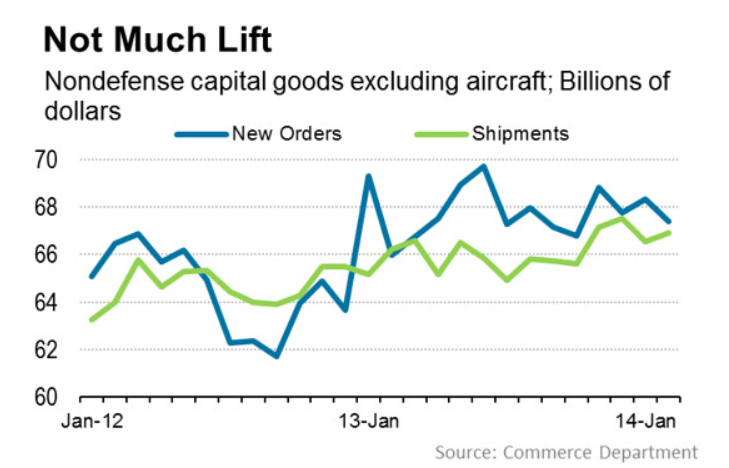 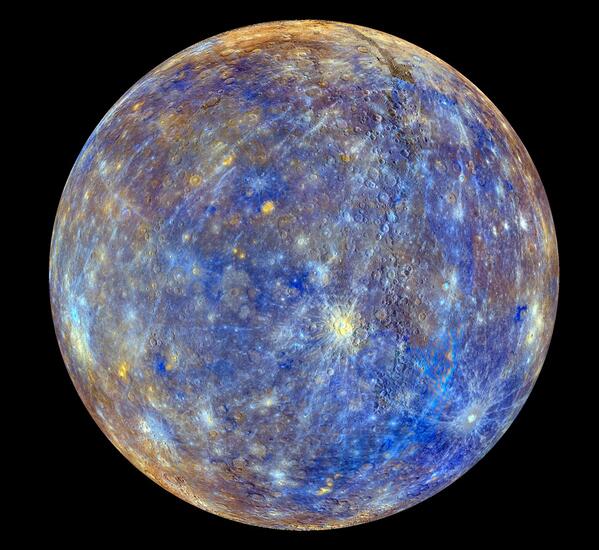 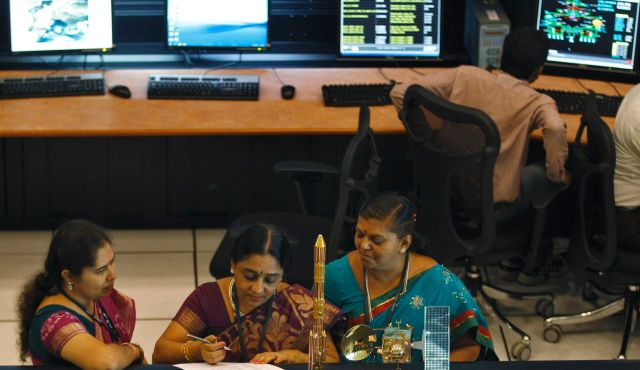 Sober Looks at the US Economy and Social Setup

Yes, we avoided a Great Depression II, but only to emerge into a Great Malaise, with barely increasing incomes for a large proportion of citizens in advanced economies. We can expect more of the same in 2014. In the United States, median incomes have continued their seemingly relentless decline; for male workers, income has fallen to levels below those attained more than 40 years ago. Europe’s double-dip recession ended in 2013, but no one can responsibly claim that recovery has followed. More than 50% of young people in Spain and Greece remain unemployed.…Europe’s continuing stagnation is bad enough; but there is still a significant risk of another crisis in yet another eurozone country, if not next year, in the not-too-distant future. Matters are only slightly better in the US, where a growing economic divide – with more inequality than in any other advanced country – has been accompanied by severe political polarization. …growth will remain anemic, barely strong enough to generate jobs for new entrants into the labor force. A dynamic tax-avoiding Silicon Valley and a thriving hydrocarbon sector are not enough to offset austerity’s weight. Thus, while there may be some reduction of the Federal Reserve’s purchases of long-term assets (so-called quantitative easing, or QE), a move away from rock-bottom interest rates is not expected until 2015 at the earliest…China’s decelerating growth had a significant impact on commodity prices, and thus on commodity exporters around the world. But China’s slowdown needs to be put in perspective: even its lower growth rate is the envy of the rest of the world, and its move toward more sustainable growth, even if at a somewhat lower level, will serve it – and the world – well in the long run. As in previous years, the fundamental problem haunting the global economy in 2013 remained a lack of global aggregate demand. This does not mean, of course, that there is an absence of real needs – for infrastructure, to take one example, or, more broadly, for retrofitting economies everywhere in response to the challenges of climate change. But the global private financial system seems incapable of recycling the world’s surpluses to meet these needs. And prevailing ideology prevents us from thinking about alternative arrangements…Maybe the global economy will perform a little better in 2014 than it did in 2013, or maybe not. Seen in the broader context of the continuing Great Malaise, both years will come to be regarded as a time of wasted opportunities.

On the 50th Anniversary of the War on Poverty, The Atlantic Monthly ran a first-rate article Poverty vs. Democracy in America. Full of pithy quotes and info, such as this about the emergence of an impoverished underclass –

50 million strong—whose ranks have swelled since the Great Recession to the highest rate and number below the poverty line in nearly 50 years. Nearly half of them—20.5 million people, including each of the people mentioned above—are living in deep poverty on less than $12,000 per year for a family of four, the highest rate since record-keeping began in 1975. Add to that the hundred million citizens who are struggling to stay a few paychecks above the poverty line, and fully half the U.S. population is either poor or “near poor,” according to the Census Bureau.

Economically speaking, their poverty entails a lack of decent-paying jobs and government supports to sustain a healthy life. With half of American jobs paying less than $33,000 per year and a quarter paying poverty-line wages of $22,000 or less, even as financial markets soar, people in the bottom fifth of the income distribution now command the smallest share of income—3.3 percent—since the government started tracking income breakdowns in the 1960s. Middle-wage jobs lost during the Great Recession are largely being replaced by low-wage jobs—when they are replaced at all—contributing to an 11 percent decline in real income for poor families since 1979. For the 27 million adults who are unemployed or underemployed and the 48 million people in working poor families who rely on some form of public support, means-tested government programs excluding Medicaid have remained essentially flat for the past 20 years, at around $1,000 per capita per year. Only unemployment insurance and food stamps have seen a marked increase in recent years, although both are currently under assault in Congress.

Here’s a beautiful picture of the Indian subcontinent, shot from space

This reminds me that India, currently, is sending an unmanned mission to Mars –  Mangalyaan. Mangalyaan left Earth orbit around the beginning of December 2013. December 11, it successfully completed a mid-course correction, and appears to be on its way to orbiting Mars by September of this year.

Not to be outdone, China landed an exploratory mission on Earth’s Moon in recent weeks. Here’s a pic taken by the “Jade Rabbit rover” vehicle brought there by the lander – I really like that name, “Jade Rabbit rover.” 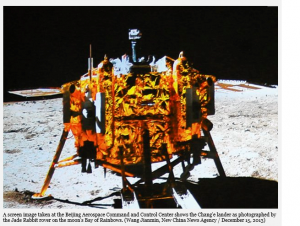 These missions both will be criticized as wasting valuable resources which could be used to deal with poverty and underdevelopment in the sponsoring countries. But I think it is more reasonable to consider all this under the heading leap-frogging – like countries which skip installing land lines for telephone service in favor of erecting lots of mobile communications towers. India and China are leapfrogging some stages of development, and may benefit from the science and technical challenges of space travel, which surely is part of the human future.

Here’s a relatively recent critique of China’s growing investment in science and technology which sounds suspiciously to me like sour grapes. It’s simple. Keep giving young people education in technical subjects with better and better science backing this up, and sheer numbers eventually will turn the tide. Inventors maybe from the interior provinces of China, neglected by the elite institutions, might come up with startling discoveries – if the US experience is any guide. A lot of the best US science and technology comes from relatively out-of-the-way places, state universities, industry labs, and then is snapped up by the elite institutions at the center.