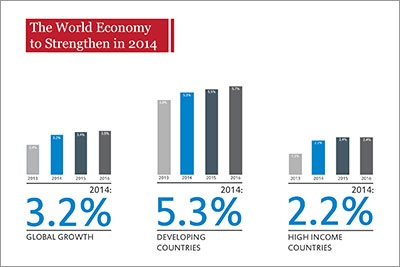 The World Bank issued its latest Global Economic Prospects report this week, basically offering up a forecast based on dynamics of (a) moderate increases in growth in the US and Europe (assuming no abrupt, but a gradual taper of QE), and (b) slowing, but stable growth in the developing world at a pace still about double that of the “developed” countries.

The story is, as with other macroeconomic forecasts issued recently by investment banks, that constraints, such as the fiscal drag on growth are being loosened, both in the US and in Europe. With currently low interest rates and continuing excess capacity, this suggests more rapid economic US and EU growth in 2014. Together with the still high average rates of growth in China and elsewhere, this suggests to the World Bank economists, that global growth will quicken in 2014.

Here is a World Bank spokesman with the basic story of the new Global Economic Prospects release.

And here are some of the specific numbers in the report (click to enlarge). 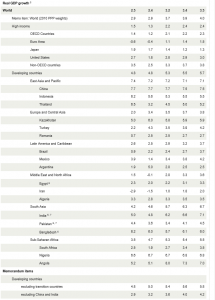