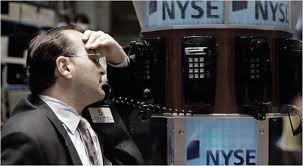 The following Table provides an update for this week’s forecasts of weekly highs for the securities currently being followed – QQQ, SPY, GE, and MSFT. Price forecasts and actual numbers are in US dollars. 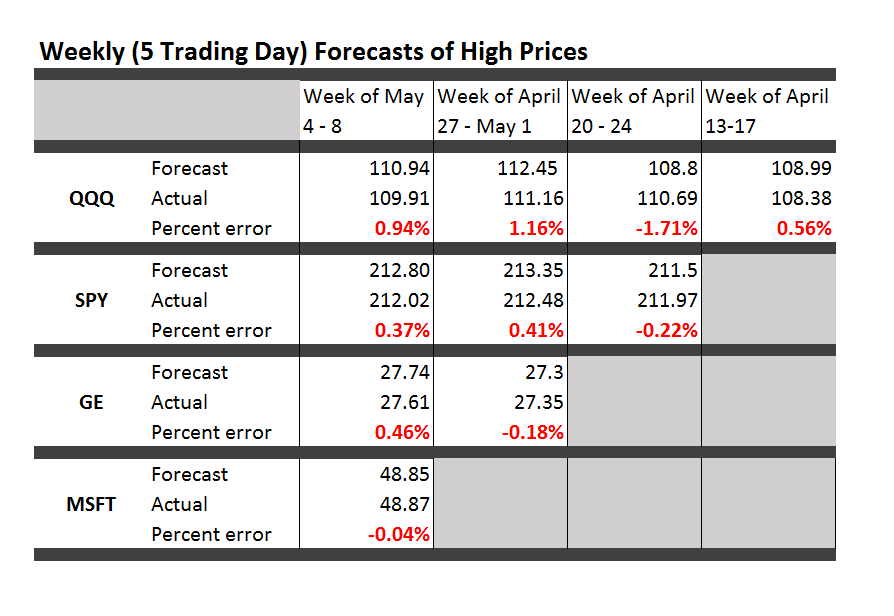 This batch of forecasts performed extremely well in terms of absolute size of forecast errors, and, in addition, beating a “no change” forecast in three out of four predictions (exception being SPY) and correctly calling the change in direction of the high for QQQ.

It would be nice to be able to forecast the high prices for five-day-forward periods with the accuracy seen in the Microsoft (MSFT) forecast.

As all you market mavens know, US stock markets experienced a lot of declines in prices this week, so the highs for the week occurred Monday.

I’ve had several questions about the future direction of the market. Are declines going to be in the picture for the coming week, and even longer, for example?

I’ve been studying the capabilities of these algorithms to predict turning points in indexes and prices of individual securities. The answer is going to be probabilistic, and so is complicated. Sometimes the algorithm seems to provide pretty unambiguous signals as to turning points. In other instances, the tea leaves are harder to read, but, arguably, a signal does exist for most major turning points with the indexes I have focused on – SPY, QQQ, and the S&P 500.

So, the next question is – has the market hit a high for a week or a few weeks, or even perhaps a major turnaround?

Deploying these algorithms, coded in Visual Basic and C#, to attack this question is a little like moving a siege engine to the castle wall. A major undertaking.

This little Monday morning exercise, which will be continued for the next several weeks, is providing evidence for the predictability of aspects of stock prices on a short term basis.

Once the basic facts are out there for everyone to see, a lot of questions arise. So what about new information? Surely yesterday’s open, high, low, and closing prices, along with similar information for previous days, do not encode an event like 9/11, or the revelation of massive accounting fraud with a stock issuing concern.

But apart from such surprises, I’m leaning to the notion that a lot more information about the general economy, company prospects and performance, and so forth are subtly embedded in the flow of price data.

I talked recently with an analyst who is applying methods from Kelly and Pruitt’s Market Expectations in the Cross Section of Present Values for wealth management clients. I hope to soon provide an “in-depth” on this type of applied stock market forecasting model, which focuses, incidentally, on stock market returns and dividends.

There is also some compelling research on the performance of momentum trading strategies which seems to indicate a higher level of predictability in stock prices than is commonly thought to exist.

Incidentally, in posting this slightly before the bell today, Friday, I am engaging in intra-day forecasting – betting that prices for these securities will stay below their earlier highs.